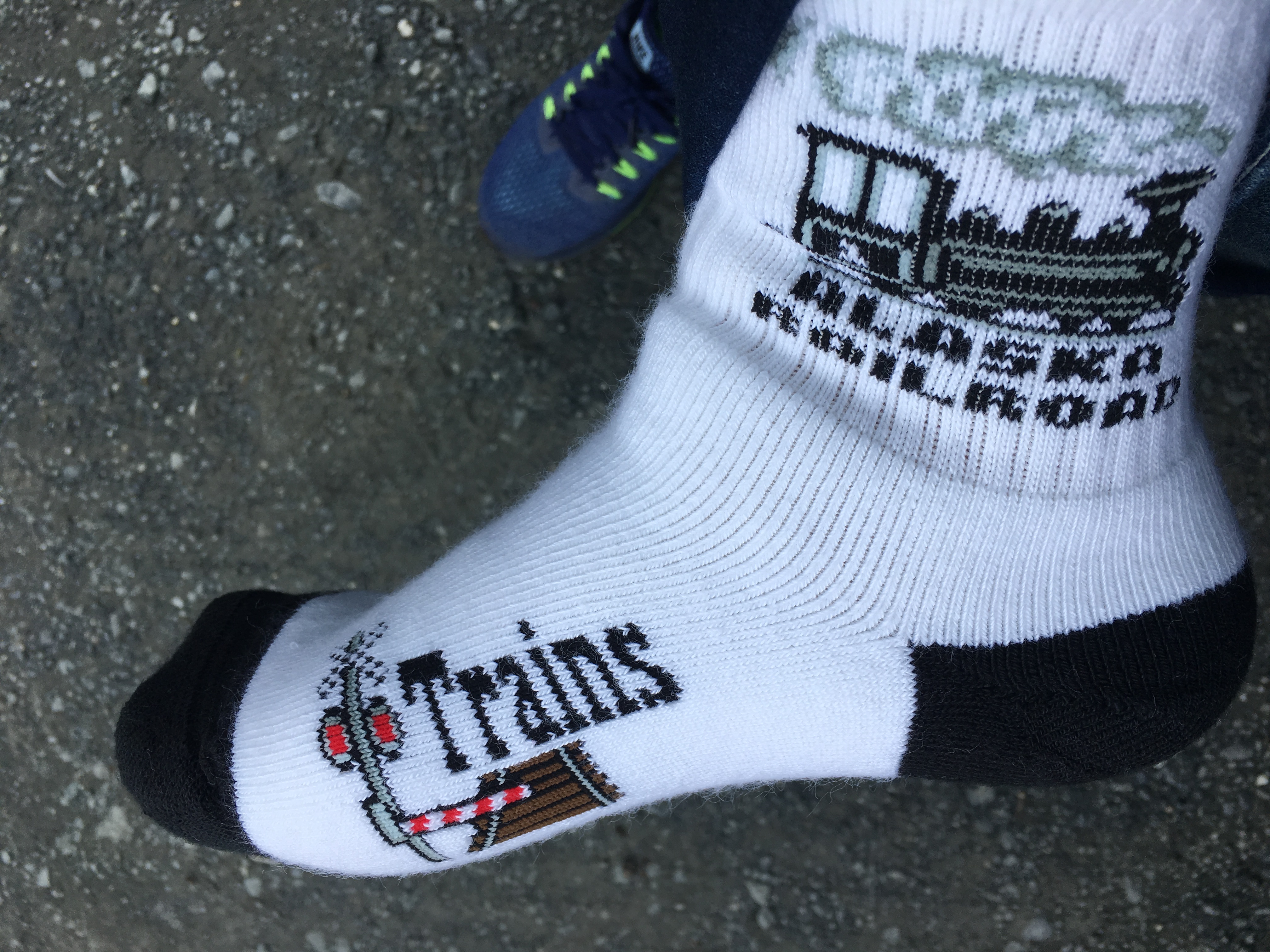 While we were in Alaska a few weeks back we took an Alaska Railroad adventure with Chugach Adventures .

I have always wanted to take the train while in Alaska, it always looks like so much fun, plus its scenic. I’ve done a few other train rides, but they were slow and boring.

According to the Alaska Railroad site our tour was going to consist of:

What a relaxing, easy afternoon. We first arrived at the Girdwood/Whittier turn off train depot to check into our adventure. We were told to get our rubber boots for the trip and to use the restroom (2 porta-potties) before we left. We were also told that we might want to add another pair of socks since the water was cold. Apparently this was listed on the web-site, but we missed it. So Eric and I purchased our Alaska Railroad  souvenir socks and put on our boots. I went to the car and actually changed my socks into these souvenir socks because they were much thicker than the socks I was wearing, figuring they would offer whatever warmth I needed them to. Plus then I would have warm/dry socks available to me after our adventure…. right?

Once our train arrived, we loaded in and relaxed taking in our ‘back country’ scenery. I say ‘back country’ because we were along side the highway for a while. But once we lost sight of the road, what greenery awaited us. We made one stop for our tour to pick up the rafts which were left at the pull out point along the river from the last tour. We were stopped maybe 10 minutes and we were on our way again.

A short 15 minutes or so later, we arrived at the Spencer Glacier whistle stop. For those of you who do not know, a whistle stop is where the Railroad just makes a quick on/off stop if there are people who want to get on/off there. In Alaska there are quite a few of these stops. This is how some people who live along the rails get their supplies or are taken in/out of town.

We were instructed to leave our bulky items and shoes on the train for us to re-claim when we boarded after our float trip. The train was going to continue on the rails and then turn around and get us a few hours later. Sadly, if we would’ve stayed on the train we would’ve seen a momma bear and her cubs. Oh well …. That’s the beauty of Alaska. There is something around almost every corner.

We left our train at the Spencer Glacier whistle stop and boarded a bus that took us to our ‘put-in’ point on the lake. The ride was a quick 10 minutes (if that) down and around a backwoods trail. We arrived our first good view of the Spencer Glacier and the beautiful valley we would be spending our afternoon.

After donning our life jackets and a brief yet information safety briefing, we were on our way. Our tour guide just happened to be one of the owners of the tour company, and a graduate of Houston High – Eric’s alma mater. Fun Alaska fact: You are always less than 6 degrees of separation from someone who know. (i.e. friends of a friend, family member or general common acquaintances) I think that’s what makes us Alaskan’s so damn friendly. Thanks Kevin Bacon!)

Turns out our raft was full of only Alaskans (or in our case former Alaskans) which made it cool for our guide. She even grabbed a few paddles for us, since we were ‘seasoned’ and I asked 🙂

The float was really relaxing. We were provided with fresh baked cookies as well as hot cocoa or tea if we desired. Plus there were bottles of water in the raft if we’d rather.

We stopped at a sandbar in the middle of the river that housed some duck eggs. We were also on the hunt for bear tracks. We saw lots of evidence of moose, wolf and maybe bear …. It had rained, so the prints were pretty smudged. I’ll let you judge.

This stop was used as a bathroom break if needed (true roughing it) and a few minutes to stretch our legs before continuing on to the stopping point and rafting end point. (Recall the train stop I wrote of earlier.)  We made it back to shore with about 15 minutes to spare before our train arrived to take us back to the Train depot we left from. Which was good, because my toes were freezing! Plus my legs and boots really don’t make good friends. I will tell you that if you have your own boots, bring them. You are allowed to wear those instead. Living in the desert, I don’t own a pair. Plus, I don’t think I would’ve really wanted to pack those suckers in my suitcase! Maybe if I was going to spend a weekend in them I would, but this was just a few hours so I sucked it up! I wasn’t raised to be a wimp … okay maybe I had acclimated into one.

The train ride back was just as relaxing as the ride in. This is when we found out about the bear family we missed. We changed back into our shoes and sadly handed over our rubber boats back to our tour guides. They thanked us for joining them and we were left to our own devices.

We did met one of the train workers who was an assistant conductor (I think). He told us he just worked up here for the summers, then in the fall he would return to Michigan where he drove a horse cart for the locals/tourists. Alaska offers so much seasonal employment. If you have a relaxed schedule or just a thirst for adventure I suggest giving it a look. You have so many options, not just fishing boats and train tours.

The Romance of the rails is alive and kicking, especially in Alaska.

I will go on another Alaskan Rail adventure for sure. It was not cheap. We paid $360 for the two of us – and that was with a BOGO coupon my dad’s wife had. But I will say that we got our money’s worth.

You have Successfully Subscribed!

Join our mailing list to receive the latest issue of the San Tan Times as they come out!

You have Successfully Subscribed!